In future newsletters we will be highlighting different organizations that are working to implement the Minimum Standards. We would love to hear from you about your experience! Feel free to email us your story, or tell us about it through the #GenderStandards hashtag!

Your partners in the journey for gender equality,

We are excited to have our first Gender Standards endorsers. We welcome NCBA/CLUSA, the Heartland Alliance, and Oxfam America to the Gender Standards community, and thank them for their commitment to mainstreaming gender equality within their organizations! 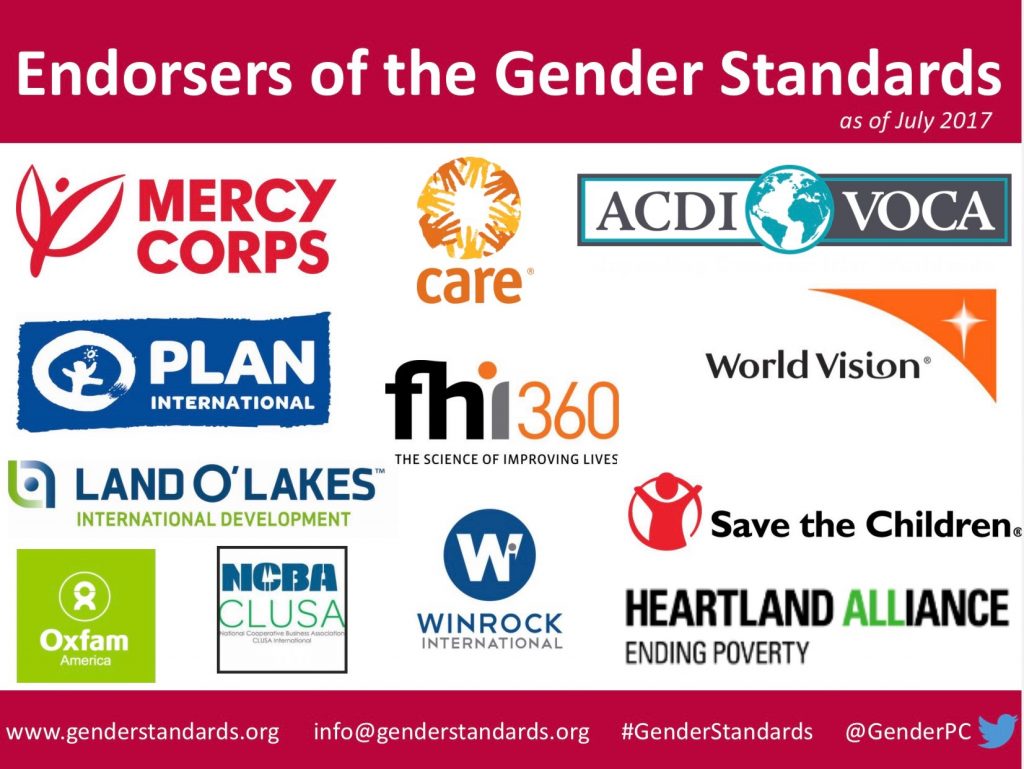 Endorsers of the #GenderStandards as of July 2017

What Does It Mean To Be an Official Endorser of the Minimum Standards?

We request that organizations formally and publicly endorse the Gender Standards by:

Tools to help ask your organization to endorse the Gender Standards

Are you interested in reaching out to your organizational leadership to ask them to endorse the Gender Standards, but are not sure where to begin? Here are three resources that may be of help.

On April 19th, 2017, the GPC presented the Gender Standards to a broad group of interested allies at the US State Department, organized by the Office of Global Women’s Issues. Participants were very supportive of the standards and asked questions on how they could weave the standards into their work with practitioners.

USAID requested that the GPC present the Gender Standards to their Gender Working Group on June 14, 2017. This included gender experts and champions across different bureaus at HQ and beyond. USAID affirmed the importance and timeliness of the Gender Standards, and asked questions about how they could go even further, and what systems of accountability could be put into place for those organizations that sign on as endorsers.

GPC facilitated a lively game show style session at InterAction Forum 2017 to introduce the minimum standards, and give the audience the chance to engage with examples of what the standards look like in practice. One of these examples included gender audit, a practical tool for conducting organizational gender self-assessments. Sharing from World Vision’s experience, Yeva Avakyan spoke about this effective methodology in catalyzing organizational change on gender issues illustrating how organizations can take practical steps in achieving the minimum standards for gender mainstreaming. 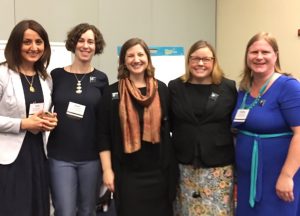 Our last stop was the UN High Level Political Forum, where we spoke about the Gender Standards as a means for strengthening organizational practices to achieve SDGs. See the story about our session highlighted on Devex. 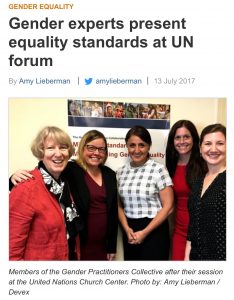 A collective group of gender specialists from 10 different international development and humanitarian organizations will launch a proposed set of minimum standards for mainstreaming gender equality, to be held in Washington, DC, on March 8, 2017.

“International Women’s Day is the perfect moment to launch this initiative,” said Kelly Fish, Senior Gender Advisor at Mercy Corps, one of the initial organizations that helped spearhead the standards. “The Gender Standards draw from the wisdom of women’s and men’s movements from around the world – as well as a diverse set of gender experts, implementers, donors, researchers and advocates – to lift up specific steps that development practitioners should take to advance gender equality.”

Gender equality is one of the UN’s Sustainable Development Goals, as a well as a means towards achieving additional goals such as a zero hunger, good health and economic growth. Evidence on this is ample. For example, if women farmers had an equal amount of resources to men, it could reduce the number of hungry people in the world by 100 – 150 million. A more equal involvement of both mothers and fathers in child rearing would help improve health outcomes in infants. And closing the gap between women’s and men’s economic participation could add 26 percent, or US$28 trillion, to global GDP in 2025.

Advancing gender equality is a goal of most international development organizations. However, the path to get there is not always clear. “We came together as a group of gender specialists seeking support and answers on what it takes to do this within our organizations and our programs,” said Elise Young, Senior Advisor for Gender Mainstreaming and Thought Leadership at FHI 360, and one of the co-authors of the Gender Standards. “When we realized that we were all struggling with the same challenges, we decided that creating a common set of standards could help not only us, but other practitioners in the field as well.”

Jenn Williamson, Senior Director for Gender and Social Inclusion at ACDI/VOCA and Gender Standards co-author, affirms the need for a common set of standards. “Both the UN and USAID have their policies on gender equality, as do several other donors and global platforms. However, there has been no central set of operating standards for organizations that are working on the ground to help implement international development initiatives. These standards help change that.”

The Gender Practitioners Collaborative will unveil the Gender Standards at Busboys and Poets on 14th and V, a symbolic place for discussing social justice. Yeva Avakyan, Senior Gender and Evaluation Advisor at World Vision, and Gender Standards co-author, highlights the importance of this launch. “This initiative is about committing ourselves as development practitioners in prioritizing gender equality in our organizations and programs. It requires looking at ourselves in the mirror to see what we can do better at our different organizations, partnering with gender equality movements around the world, and holding ourselves to an even higher level of accountability.”

The Gender Practitioners Collaborative is an informal group of U.S.-based gender advisors and technical gender experts from international development and humanitarian organizations with a vested interest in promoting the practice of gender equality mainstreaming within our organizations and programs across every sector.